The Winners & Losers Of The New Tax Plan 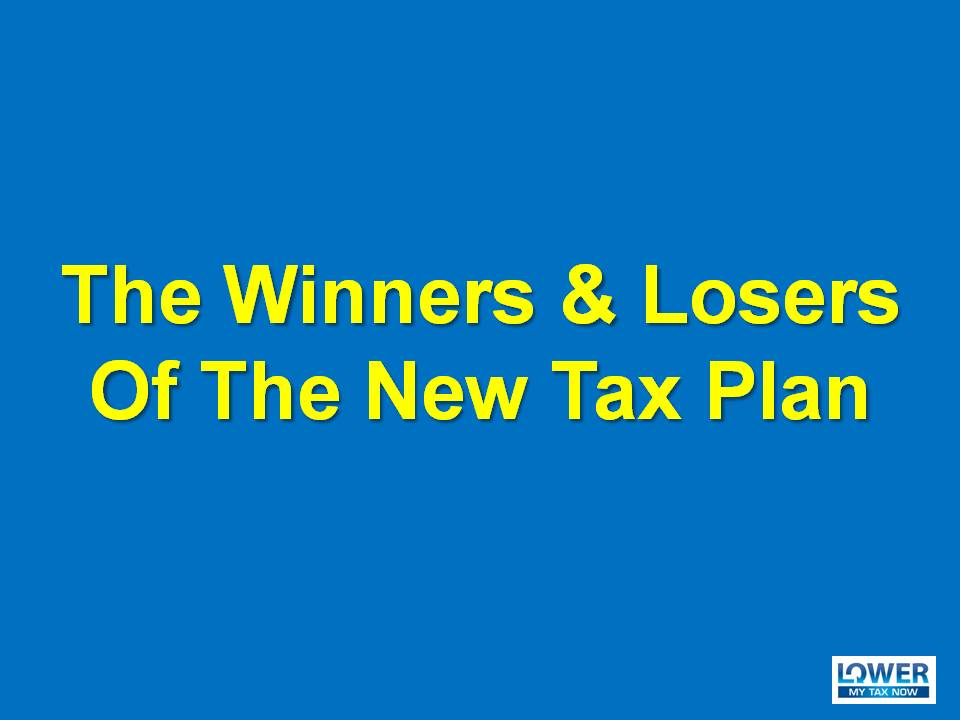 Did you see the news re: the proposed tax plan last Wednesday?

Well, the more important questions are:
What does this new tax plan really mean to you?
And how is this going to affect you?

With proposals like this, they have a lot of work to do, before it becomes final. We don’t know if this is going to pass or if it passes, when it will be considered a law. So with that in mind, I would just tell you the winners and losers with this proposed tax plan. Here goes:

Winners
• Businesses with high tax rates – from 35% corporate income tax to 15%. That’s a tax savings of 20%. So for example you made $1 million in your business, your savings will be $200K.

• Multimillionaires who want “0” estate tax – this would take care of your taxes, if your estate is more than $5.5 million or $11 million for couples. Did you know that estate tax rate can be as high as 40%? So if your remaining estate is $1 million after the exemption, then you still need to pay $400K in death taxes. This is a huge windfall for the rich!

• People who are subject to AMT – AMT mean alternative minimum tax. Now, raise your hand if you think I just said a “greek word”. AMT was designed to keep the rich taxpayers from using loopholes to avoid paying taxes. There are some tax deductions that are added back for AMT purposes, examples are state tax withholding and r/e property taxes. So we can compare between the regular vs AMT tax. And we need to use the higher tax.

• Donald Trump – surprise, surprise! All the items that I just mentioned just now will have a huge impact on Donald Trump’s taxes. He got 564 business entities according to his financial disclosure form and he can take advantage of the 15% tax rate. Do you know why he hates AMT so much? Because on his 2005 leaked return, he paid an extra $31 million in AMT taxes.

Losers
• Upper-middle income people with high state tax rate – because the state tax that you are paying will not be tax deductible under the new proposed tax plan.

• Housing industry – by doubling the standard deduction and removing some of the itemized deductions, you might not be encouraged to buy homes.

• Non-profit and charitable organizations – similar with the housing industry, by doubling the standard deduction, there might be a fewer financial reasons to donate to charity.

• Middle-class taxpayers – the first 70% of the low-income population will not be paying nor will be filing taxes with this new plan. While the top 1% will have a huge windfall. And the middle-class will be squeezed in between and will be the one who will be paying the tax.

Now what? Are you confused yet? Here’s my advice to you:

• Turn your hobby into a business and
• Structure yourself as “self-employed”.

Again, let me repeat, this is a tax proposal and we have no idea what will happen. But there’s one thing I know though, Trump’s proposed tax plan isn’t going to be easy. In the words of film director Martin Scorsese, there’s no such thing as simple. Simple is hard.